Is all-connected global humanity now facing
the prospect of economic collapse and war?

Or will the United Sovereigns of Earth
wake up, wise up and stand up for
the ‘Currency of Conscience’?


Continued from Part One, HERE

- Next Economy vs. Economic War;

- Next Economy vs. Economic War:

The big problem getting the Next Economy into our minds
is first getting the old scarcity economics out of our heads.

The oxymoronic ‘value of scarcity’ of our status quo
system of scarcity economics is obsolete due to the
extraordinary abundance of ‘clean free energy’ that
makes the predominant model of scarcity obsolete.

Scarcity economics is the creation of scarcity for
profit and control.  It is the concealing, wasting or
outright destruction of abundance for the purpose
of societal control and profit - monopoly capitalism.

Abundance economics is the creation of abundance.
Above all, it is spiritual intent for an abundance of love
that translates to abundant awareness... of solutions.
Love of solutions will create them with love-in-action
as holy spirit for our personal and planetary ascent.

As the Currency of Conscience is liberated systemically,
abundance is naturally cultured for our health, prosperity,
and social Conscience in our ubiquitous social networks.

Scarcity’s value ‘appreciates’ or is appreciated only
if maintained by suppressing the abundance that
makes prevailing scarcity economics obsolete.

That's why the "value of scarcity" (scarcity economics)
is virtually insane in the context-potential of, by and for
unprecedented, extraordinary abundance.

Emerging capability for an economics of abundance
is the final judgment on poverty consciousness that
ignores, denies and outright sabotages abundance
for the monopoly on power at the expense of liberty.

Anti-life policies, the 12 illusions afflicting humanity,
are a direct result of current economic war against
abundant ‘Conscience’ of and for the abundant life.
(Conscience is consciousness plus morality.)

This video resolves the ‘1st Illusion’ with an opportunity:

POWER OF, BY AND FOR THE PEOPLE

The power to think, seriously, about 'Higher Power'
(which naturally liberates us from 'tyrannical power')
brings us to conscientious common sense consensus.

The Bizarre Coincidence of Patriot's Day

The holiday known as Patriots Day is celebrated on the third Monday in April.
Interestingly, the Oklahoma City Bombing occurred on Patriots' Day in 1995.
Additionally, the Waco Texas Massacre of Branch Davidians on Patriots day.
Further, the Boston Marathon Bombing happened on the same day as the
controlled explosion drill by the Boston Bomb Squad on, you guessed it,
Patriots Day!

As Mark Twain once quipped, "History does not repeat, but it sure does rhyme."

Ask yourself, who in America could orchestrate
such 'coincidence' by plan and intent?

"Those who have studied history know that nothing invigorates and empowers
an authoritarian regime more than a spectacular act of violence, some sudden
and senseless loss of life that allows the autocrat to stand on the smoking rubble
and identify himself as the hero. It is at moments like this that the numb public
- still in shock from the horror of the tragedy that has just unfolded before them -
can be led into the most ruthless despotism that now bears the mantle of
'security.'
"Acts of terror and violence never benefit the average man or woman.
They only ever benefit those in positions of power." ~ James Corbett 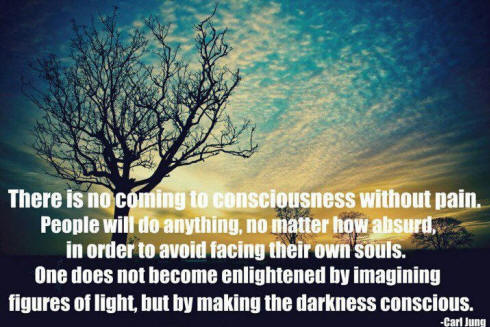 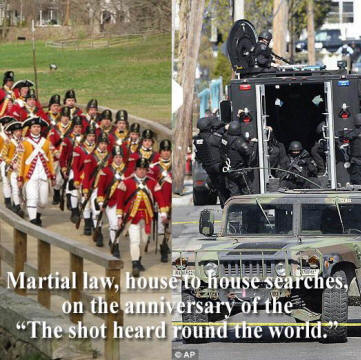 We've all heard, "The pen is mightier than the sword",
as the printing press and Tom Paine's 'Common Sense'
proved with the American Revolution's revolt against the
abusive 'powers-that-were'... politically correct tyrants.

It is likewise true that a rising chorus of Conscience today
is mightier than the politically correct attempt to disarm us. 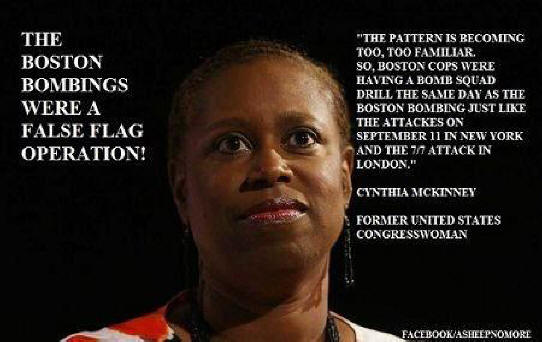 
The intent of the Founders' was to demand liberation from
the tyranny of bad intentions by the power elite back then...
calling for the 99% to UNITE to liberate public POWER.

The Next Economy will naturally emerge with the
currency of Conscience. Or as the Chief Architect
of the U.S. Constitution said about this ‘currency’,
“Conscience is the most sacred of all property.”
~ James Madison, 4th U.S. President

If we want to get ahead in the game of life on Earth,
then we’ll want to replace win/lose rules with win/win.
Co-creation as a win/win engages the Next Economy
with Conscience as the currency for self-correction.

“Conscience is what Conscience does”, as an
ascended master ‘Forest Gumption’ might say...
along with “Shift Happens” J

In good Conscience, the Founders’ pure intention,
the Next Economy emerges with an abundance of
clean free energy to power our homes and industry
without power-lines and toxic emissions poisoning
our air-water-food and Earth’s life support systems.

“Power to the People” in REALITY will eliminate the
insanity of wars over petro-dollars that underwrite
a failed win/lose economy whereby the 99% loses.

The problem getting mass awakening into our hearts
is overcoming systemic DUH in the public sphere:
Dense as in Dim-witted – Dumber that Dumb;
Unconscious as in Unaware – Uniformed;
Heartless as in Half-witted: no Heart.
(‘Smart’ without heart is DUH)

All social, political and economic problems are - at heart -,
communication problems; how we come into unity;
the heart of REAL community with common unity.

The public sphere is now a global village of instant-
everywhere and interactive Internet reality, and
mass awakening for the Family of Man will
bridge our Net Reality with an InnerNet
interface - Heartware - as involves
and evolves our individual and
collective Conscience.

‘Higher Education’ is an oxymoron if it is heartless.
Wise dominion begins with education of the heart.
Heart coherence is the science of this connection.
Heartware combines heart coherence biofeedback
with ‘mind congruence’ via interactive e-valuation.

The Internet as a gateway to the global InnerNet
is still as ‘mystical’ a subject as was the Internet
BEFORE the Internet. Who would have believed,
back in 1990, that the personal computer would
become a global network of hand-held computers
with virtually all global knowledge at your fingertips.

The computer/Internet revolution has brought us
to this point – the infrastructure is now installed.

Smart phones now have more computing power
than computers that put the 1st man on the moon.

How that infrastructure is now integrated with
hardware, software, netware and heartware
is how we’ll naturally get our act together with
MASS AWAKENING. 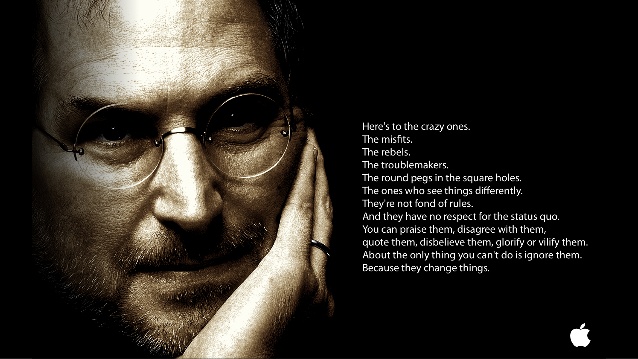 Thanks to Steve, we now have a platform for global rEVOLUTION,
and the opportunity to use it for optimizing conscious evolution.

To elevate the ‘Family of Man’ in our all-connected ‘Global Village’
is the choice of, by and for the United Sovereigns of Earth...
to make it so.

"I believe that all clear-minded people should remain
two things throughout their lifetimes:
curious and teachable."
~ Roger Ebert (RIP)

“Your task is not to seek for love, but merely to seek and find
all the barriers within yourself that you have built against it.”
~ Rumi

The difficulty getting Fearless Love into one’s heart
is like getting faithless fear out of one’s mind.

Yes, there is much systemic ‘DUH’ in the world,
but Fearless Love is the way out of that world.

It is Fearless Love that goes ahead with
the pure intention – unconditional love
as is non-attached to results, yet
treats all so as to honor the
Higher Power of Love. 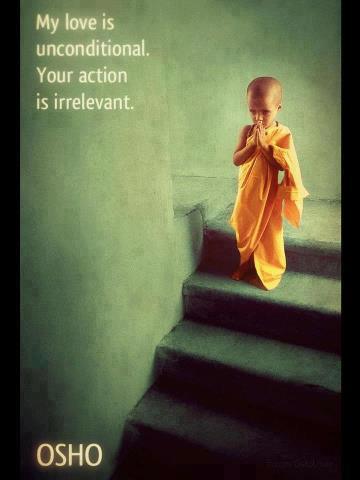 ogic benefits
when in BALANCE-

is greater than the sum of the parts.
This is the power of

For example, fearless love of, by and for all humanity
will hold the vision of ‘Universal Self Care’ to create a
‘prayer field’ of abundant expectation and anticipation
in order to empower this vision of virtue and valor to
make it so!

‘All Ways’.
(Assembling the components to the ‘CAPstone’)

This Conscience Currency
is dedicated to the
One Eye

"The light of the body is the eye:
if therefore thine eye be single,
thy whole body shall be full of light.
~ Matthew 6:22 (King James Version)

The Creative Ascent Process of this CAPstone vision
provides the Ascension Codes that involve and evolve
source code and light language for your 5-D holodeck
between your ears!

Mastery of 5-D wholEness naturally opens
your stargate portal to the heart of Source
and the universal mind of G.O.D.~

This self-mastery process for each individual
is the same self-correcting and self-governing
process defined by the Heartware interface for
interactive mass-to-mass TeLeCom within any
social network community, local or global, as will
involve and evolve our individual and collective
social Conscience within our social networks.

“God grants liberty only to those who love it,
and are always ready to guard and defend it.”
~ Daniel Webster

Innovation is the artwork of 'cultural creatives'
who transcend social paradigm paralysis
with core models for cultural reboot
that make old models obsolete.

Those who created the status quo want to keep what they created,
even when it serves their special interest that has a vested interest
in paradigm paralysis – resistance to change from a monopoly on
power and control for themselves rather than for our common good.

Big Oil does NOT want clean free energy for the common wealth
and for cleaning up the toxic world that petrochemicals created.
That would be disruptive to their self-serving scarcity paradigm.

What would happen to the military-industrial complex if
they didn’t have wars for oil and control of petrodollars?

Big Pharma does NOT want free on-line Universal Self Care for
the ‘common health’ and for healing the sick health care system.
That would be disruptive to their self-serving scarcity paradigm.

What would happen to the medical-industrial complex if
they couldn’t make a killing on the treatment of disease?

Big Media does NOT want the Whole Truth of these solutions
for the health and wealth “of, by and for the people of Earth’.
That would disrupt their profits from Big Oil and Big Pharma.

What would happen to the media-industrial complex if
they put Constitutional principle before corporatocracy?

Big Banks do NOT want ‘Abundant Conscience’ as a currency
that liberates the public’s “stinking thinking” (paradigm paralysis).
That would disrupt bankrolling of "to big to fail' corruption in
the military-medical-media complex.

Big Government does NOT want the public to wake up, wise up,
and rise up with a peaceful revolution in higher consciousness.
That would disrupt their embedded subservience to the dictates
of Big Oil, Big Pharma, Big Media, Big Banks and the Big War
insanity that does the same thing yet expects different results.

‘Sunshine’ as ‘Systemic Transparency’
- to see through the veils of illusion -
is the path to ‘Common Sense’ folks.

Now is the time ordained to link the light of truth and love.

"When I despair, I remember that all through history the way of truth and love
has always won. There have been tyrants and murderers and for a time,
they seem invincible, but in the end, they always fall -- think of it, ALWAYS."
~ ‘Mahatma’ (Great Soul) Gandhi, Father of India's Independence

Be the ‘watchman on the wall’ who alerts the community of
oath keepers, light bearers and love makers.

The Ben Franklin’s of today will print the truth,
the Whole Truth that will liberate Conscience
and keep us aware and on guard, vigilant to
-- 'The Opposition to Legitimate Dissent' --
in blogs and websites of the worldwide web.

The Paul Revere’s of today will alert the public
of the crisis and the opportunity to resolve it
by arming ourselves with the liberating truth.

And underwriting this Evolution Revolution is the
‘Currency of Conscience’:

Seize the Vision – the ‘high ground’ of ‘Higher Power’;
Embrace the Virtue – higher Conscience for Wisdom;

Act with Valor – make the Vow of, by and for Love;

Keep the Faith... All Ways, “Here’s to the crazy ones.  The misfits.  The rebels.  The trouble makers.
The round pegs in the square holes. The ones who see things differently.
They’re not fond of rules. And they have no respect for the status quo.
You can praise them, disagree with them, quote them, disbelieve them,
glorify or vilify them. About the only thing you can’t do is ignore them.
Because they change things.”
~ Steve Jobs