What in Heaven’s Name is Going On?

Get Ready for the 'Next Economy'. 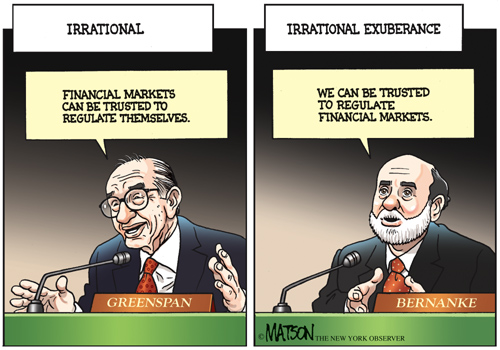 In Banksters or In God We Trust?

Previous article on 'Metamorphosis' at:
‘Networks of Grace Emerging’

Is the Currency of Conscience Going Mainstream?

Judge Napolitano testifies of Treasury Secretary and Federal Reserve-
insider Timothy Geither's arrest in this 4-minute corporate news show.
Arrests of bankers are proceeding with more than 100 'resignations'.
David Wilcock and Benjamin Fulford explain and document history and
deceit at the top of global finance, leading to current and imminent arrests.

Top bankers worldwide are resigning. Goldman Sacks is being ‘outed’
with charges pending for criminal conduct behind global economic
disruption, dysfunction, disintegration and 'dark solutions’ with
austerity policies causing public suffering for subservience
to ownership and control policies by a corporatacracy
managed by 'Super PACs' and Congress lobbyists
to covertly control "Big Media" (perceptions);
to overtly control "Health Care" (policies);
and to manipulate public elections via
the secret counting of ballots and
covert electronic vote hacking
to own and control "US"
(United Sovereigns).

Which begs the Big Question…

How will the universal spirit of sovereign
freedom and opportunity go mainstream
in this long-heralded year of 2012?

Is it true that ancient prophecies now concur with quantum science
in regard to a new global unity-in-diversity emerging in 2012?

Are you aware that global society is now going through a transformation
as profound as the shift from the Dark Ages to Enlightenment behind the
American Revolution shift from tyranny to representative government?

And as the light of the 'Source Field' surges in 2012...
Would you agree that the conscious evolution revolution in global civilization
has arrived at a stage of metamorphosis whereby the old order paradigm
of "scarcity's value" (scarcity economics) is disintegrating and the new
order paradigm of "abundant virtue" (abundance economics) is now
"coalescing" (integrating) as the "Light of Source" (Conscience)
goes mainstream with 'Common Sense' in our global village? 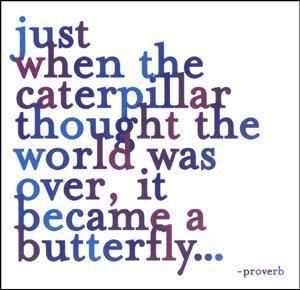 The  metamorphosis in global civilization is analogous to the
'end of the world'  for the old "paradigm paralysis"
(stinking thinking)
which is like hypnotic brain entrainment that goes along
with the empire's totalitarian scheme for a
New World Odor (lock-step order)
that stinks to high heaven.

A new order of freedom and opportunity based on core Constitutional processes
is no less important than invention of electricity and light bulbs.

The profound process of transformation in global civilization could be compared to the
different stages of a caterpillar's transformation into a butterfly. The caterpillar spins a
cocoon around itself and disintegrates inside the cocoon into a blob of grey gunge.
When the grey gunge has liquefied to a certain point, cells called "imaginal cells"
are genetically awoken in it. These cells feed off the gunge for their growth as
they increasingly cluster together to form, through a genetic-coded alchemy,
into a wholly new BEING with the body and wings of the emerging butterfly.

As the veil thins in 2012 with surge in the 'Source Field', and as full disclosure of hidden truth
goes mainstream with new enlightenment, we're seeing the emergence of a ‘new human’
- metamorphosis through genetic-DNA awakening with Effective Sensory Perception -
as the 'Big Lie' disintegrates (grey gunge) and a ‘butterfly’ integrates 'holistically'.
This is integration of spiritual, mental, emotional and physical faculties with the
process of evolutionary ascent  in our consciousness, BEING and world.

If you're still a 'caterpillar', that concept is as incomprehensible as
conceiving 20 years ago what the Internet would be like now.
But if you have already emerged as a 'butterfly', you get it;
the Internet is evolving with the 'cosmic InnerNet' as is
transforming our DNA with the light of God-Source:
A New Order is Emerging - A NEW HUMAN. 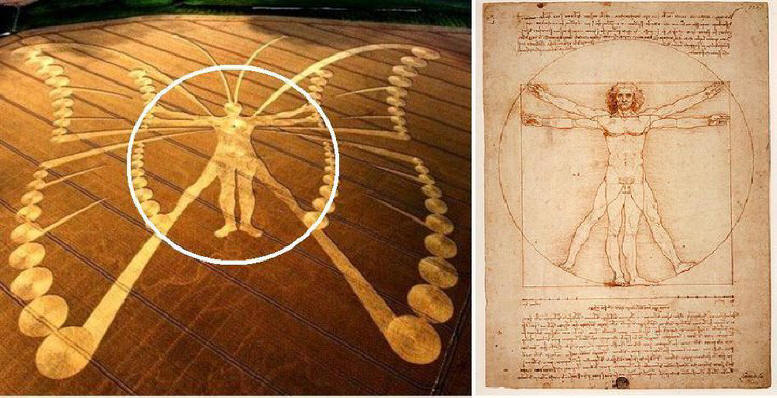 This is not unlike the process that is now transforming
the collective-unity Conscience of global humanity
as will take ‘wing’ in this amazing year of 2012.

principles
and processes no less transformative than from caterpillar into butterfly.

This process shaping the global communications revolution
is naturally culturing unity in our diversity for transcending
the “outmoded” (corrupt) divide-to-conquer agendas of the
same old aristocracy - the corporatocracy - which milks the
‘light’ of the masses, our sacred Conscience and life essence,
(like the vampire movies popularized by Hollywood)
to serve their special interests that have a vested interest in
keeping freedom's opportunity FROM the people rather than
“of, by and FOR the people”. 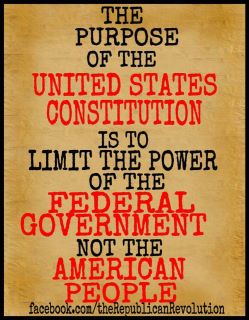 2012 is not about the end, but the potential for a new beginning
for those of us with the inner resources to unite for a purpose.

That purpose is to culture personal and planetary metamorphosis
and that process is a self-fulfilling prophecy when actualized.

So as the veil of illusion ‘thins’ at an accelerated rate in 2012,
know the truth to be liberated from the enemy of truth.

To claim Victory in 2012, we must naturally conceive, believe
and achieve a clear vision of how the ‘imaginal cells’ of our
‘global consciousness’ are going through a metamorphosis
process to create a new 'Net reality' with an unprecedented
TeLeComm upgrade of our core Constitutional freedoms for
culturing social Conscience in our interactive social networks.

This is a community building process that involves and
evolves conscientious common sense ‘Unity Conscience’
at the heart of our humanity; the honor of sacred purpose
whereby, “Conscience is the most sacred of all property.”
~ James Madison, Chief Architect of the Constitution

This systemic metamorphosis process may be far different
from the prevailing lock-step status quo matrix mindset,
and yet far better than we ever dared to imagine possible.

The Whole Truth has always been the best answer to the Big Lie of
predatory capitalism that attempts to own and control the world.

This following video is the best overview on the subject I've seen!

Yes, the banksters - and corporatocracy that has grown up around them -
have hijacked the public treasury and representation process and has
also built the military-industrial and media-industrial complex as a
means to force illusion in service to the soulless machine matrix
also known as the “M-5 Complex” (Corporatocracy Complex);
the ‘Management-Media-Medicine-Market-Money Complex’
that demands 'SOULutions' for wholEness and healing:

MANAGEMENT: By banksters – the false-flag ‘Federal Reserve’ banking system -
is neither ‘federal’ nor has any reserves, foisting mass deception
to own and control the best government that money can buy.
SOULution: Pure intention neutralizes the ordinate love of power.
Raise the standard of the ‘Currency of Conscience’ with an
open system of public representation as will make our public
management systems clearly accountable to public purpose.

MEDICINE: The mainstream medical-industrial complex has resorted to
the use of toxic genetic poisons in vaccines to create and
profit from disease – Big Pharma’s ATM – to make a killing.
The elephant in the room that few are willing to talk about
is the rise of infectious disease in vaccinated populations.
SOULution: Love’s retention, emphasizing the ‘care’ in ‘health care’
will appreciate how ‘Universal Self Care’ could be easily
available over the Internet for ‘Global Holistic Healing’.

MARKET: Wall Street is a sick metric for a healthy economy because
it profits from terror, war, disease and destruction of life.
The marketing of this insanity to maintain the M-5 Complex
is a systemic sinister force that is self-destructing in 2012.
SOULution: evolutionary ascension of 4th wave business models
will redefine 'success' via social-profitting entrepreneurship
serving the purpose of common wealth in good Conscience.

MONEY: History has shown that money-changers in the ‘temple’ of
‘God government’ are the cause of evil via ‘government god’,
and those evils only go away with the currency of Conscience.
SOULution: By culturing the currency of common sense Unity Conscience
- the ALL-connected dimension of win/win co-Creation with Source -
(with self-correcting, coOPERATIVE commUNIcaTIon processes)
we bring light to dark places for wholEness, healing and ‘salvation’.

Will the new global ‘US’ come to mean “United we Stand”
(United Sovereigns), or will we continue to suffer “DUH”
(Dumb, Unconscious and Heartless) that translates to
“Unconscious we Surrender” (as United Slaves)?

"Sometimes I wonder whether the world is being run by
smart people who are putting us on, or by
imbeciles who really mean it."
~ Mark Twain

Will we unite with conscientious common sense, or the
unconscionable suffering sinner/saint syndrome?

"Next the statesmen will invent cheap lies, putting the blame upon the nation that is attacked,
and every man will be glad of those conscience-soothing falsities, and will diligently study them,
and refuse to examine any refutations of them; and thus he will by and by convince himself
that the war is just, and will thank God for the better sleep he enjoys after this process of
grotesque self-deception."
~ Mark Twain

Will the American people wise up and rise up to challenge the
illusion of representation by the entrenched corporatocracy
that marginalizes the Constitution and rigs public elections?

"It is curious that physical courage should be so common in the world
and moral courage so rare."
~ Mark Twain

Follow your Conscience and follow the money to clearly see
who is ‘bought-off’ to represent the banksters in 2012. 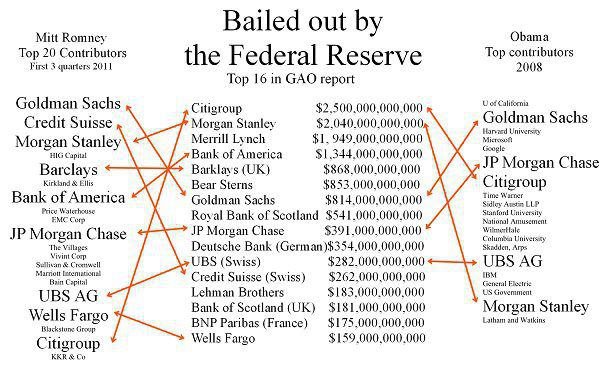 Note that the ‘chosen’ candidates for U.S. President
- Romney and Obama -
were ‘chosen’ by the biggest bankster cabal of all time
- one of the owners of the false-FED banking system –
and that the golden rule of Goldman Sachs is
“He who has the gold makes the rules.”

For too long, our core institutions have degenerated and are now disintegrating
because they have served power without Constitutional principle,
and profit without a moral compass.

REALIZE WHAT ‘OCCUPY WALL STREET’ IS TRULY ABOUT:
THE STOCK TRADERS WHO ARE TRAITORS TO
THE ABUNDANT LIFE FOR ALL OF “US”
(United Sovereigns of Earth).

In this three minute YouTube video of a BBC news clip, you’ll see a stock trader
shamelessly take delight in the global collapse of the economy, saying openly that,
"The government doesn't rule the world; Goldman-Sachs rules the world",
and that they don't care about right or wrong, but simply an opportunity for profit,
' hedging' (betting on) collapse and war to strip 'equity' (profit) out of the economy.
The BBC News interviewer is shocked by this arrogant trader who sees a "dream
come true" for himself, even though it's a real nightmare for 99% of the public.

Are you aware that there are clear and compelling solutions for
all of our social, political and economic institutions, but instead,
abundance is suppressed to maintain the status quo of austerity
and a scarcity of abundance to maintain the corrupt system of
‘scarcity economics’ based on the oxymoronic ‘value of scarcity’?

Is it true that the power elite owners and controllers of the
Management-Media-Medical-Marketing-Money Complex
want to limit and control freedom and opportunity in order to
further their dark ‘full-spectrum dominance agenda’ (NWO)
to own and control this platform of evolution for all humanity?

Would you agree that ‘Big Shift’ is imminent in 2012 and that
1- Solar activity is intensifying with "the biggest solar storm in five years";
2- Earth's morphic energies are 'rebooting' with the Light of God-Source;
3- Conscious evolution is 're-calibrating' with Effective Sensory Perception;
4- Metamorphosis of our personal and collective 'Net reality' is, at heart,
a systemic paradigm shift of a spiritual nature?

If that resonates true with you, then watch this excellent video on
metamorphosis: ‘Transforming Challenges into Blessings’
by Jack Allis. See his March Newsletter HERE.

, All Ways, with the
Emerging Blueprint for a Golden Age,

Look to SEE - Know to BE - the Nature of Spiritual Geometry whereby
The Law of the Angles of “G.O.D.” (Geometry Of Divinity)
frames the “Language of the Angels of

To love with all your mind ~

aw,
and all your heart ~

, right-brain nonlinear-intuitive spirit of the law,
and all your strength ~

, balanced brain of a power-wisdom-love nature,
and your Netizen neighbor ~

PS: It has been a slow winter painting houses here in the mountains of Montana
so please help support these writings while you support your health with
extraordinary health products at UltraMedics Services. Thanks ~ C.