PREFACE:  COORDINATES FOR THE BIG PICTURE

WHY?  A Compelling Call to Conscience for Human Evolution.

WHERE?  Earth as a Platform for the Evolution of Sentient Life.

WHEN?  The Power of Now at the Heart of Eternal Progression.

WHO?  It’s all about You and the Choices You Will Make Now.

HOW?  Understanding Ordained Power as the Holy Spirit of Love-in-action,
Creating a Prayer Field of Pure Intention, Focusing Attention
on the Evolutionary Ascension of Consciousness;
a Conscience Convergence at the Heart
of the Aquarian Dispensation of
Freedom in


"Many people have an intuitive sense that the end of the Mayan calendar will bring a shift in consciousness.
Yet, it is rarely clearly stated or explained exactly what is the source of such a shift, how it will happen or its nature.
Maybe however shifts in consciousness are actually a little less mysterious than many people tend to believe.
In fact, shifts in consciousness have been happening from the beginning of time and continue to happen whenever
there is a significant energy shift in the Mayan calendar, such as between any of its DAYS and NIGHTS. Fig 1."
~ Carl Johan Calleman, from the article link above (charts and graphics included)

Will this be the prophesied "end of the world" as we have known it?
Is that the true meaning of the "Great Purification" as the Hopi call it?
Are you aware of the "2nd Coming" as a collective spiritual initiation?
Would you agree that higher Conscience makes "DUH" obsolete?

Faithless fears in the collective unconscious of humanity are mitigated by
fearless faith in our latent subconscious intention for our divine destiny.
Collective awakening as conscious attention to higher Conscience is
emerging as the superconscious blueprint for planetary ascension.

"The present world situation is calculated as never before to
arouse expectation of a redeeming supernatural event."
~ The Father of Modern Psychology, C. G. Jung (1875-1961),
a synchronicity visionary with uncanny "future memory".

As we become more conscious with the full spectrum Conscience
that cultures up-wising and uprising for revelation rEVOLUTION,
unconscious fears are neutralized by a more conscious faith in the
light of full Conscience embracing superconscious wholEness:
THE UNIVERSAL LAW AND LANGUAGE OF ATONEMENT,
the global Conscience convergence.

The greater one's pure intention for discernment of the signs,
the greater is the compelling need to center attention on our
individual and collective "ascension" (divine destiny).

When you fully comprehend the meaning of "Conscience Convergence",
you'll KNOW for sure... what the "2nd Coming" is all about,
especially if you replace the word "Conscience" with "Christhood"
throughout the copy at: "Coming Earth Changes".

"Man can harness the winds, the waves and the tides,
but when he can harness the
power of love,
then for the second time in the history of the world,
man will have discovered fire."
~ Teihard de Chardin

The "2nd Coming" of Christ Conscience
was never meant to be mythology.
It's a core part of theology; Biblical Truth.

We're in the time spoken of in Revelations,
and the 2nd Coming is only delayed by
one's inability to connect the dots for
atONEment; the Spirit that matters.

May thine eyes be single at ONE with the
mind of Christ within you... as is the
standard practice for the 2nd Coming
in our collective hearts and minds.

This is the convergence of unity Conscience
of an Effective Sensory Perception nature
that will unveil the gifts of the holy Spirit
at the time when the shift goes mainstream.

If you are following the news at all and still have your eyes wide open,
you know that there are ample signs to indicate the urgency now.

1- Realize how the magnetic reboot of Earth will reboot consciousness.
Download, the pure geometry archetypes (thoughtforms) for "reboot" at:
"Emerging Blueprint for a Golden Age, and "Dimensional Coordinates";
Print hard copy to re-cognize (re-member) when the magnetic grid
reboots in the 3-7 day process of a physical pole shift of the Earth.

2- Prepare with food reserves and supplies while they are still available.
Let me know if you are interested in buckets of local Montana grains or
high quality long-term food reserves in 10# storable cans.  For deep
discounts on food and other supplies, go to www.aafoodreserves.com

3 - Pray and prepare now as though your life depends on it.  It may.
Those who are prepared can best help those who are not.  This is the calm
before the approaching storm.  Heed the urgent signs now and prepare
spiritually, mentally, emotionally and physically.  This is not a drill.
If you prepare, there's nothing to fear.

Life of the Spirit in the scheme of soul evolution -- testing on the path of eternal progression;

Life of the Mind aspiring to the Conscience of "G.O.D."- Geometrically Ordered Divinity;

Life of the Body as the wholE temple -- the heart, head and hand of G.O.D.~

It ain't rocket science.  If you prepare now, you don't have to later.
Connect the dots to get the big picture and simply get congruent.
DO what the poor in spirit are not able or willing to do.

Mark my words. This may sound crazy (if you don't really hear me)...
but we must raise the auric "shields" (magnetic fields) not just
individually but in the morphic grids of collective Conscience.
Call it a prayer field of pure intention for self-correcting salvation.

Imminent danger is inbound, but the veil is thinning between the
the sense of separation from the prime directive at this time and
the connection with Conscience that fulfills our divine destiny:

The Prime Directive for Personal and Planetary Conscience;
The culturing of Christ-like social Conscience with LOVE;
Morphic fields of Conscience as an "auric" (magnetic) shield;
Maintaining auric field magnetism, individually and collectively.

It's time for a global rEVOLUTION in higher Conscience.
Now is the time for the science of the spoken Word to
go mainstream with mass-to-mass invocation of
the Word of G.O.D.~LOVE in form and frequency,
as in frequently... the holy Spirit as

May the expectation and anticipation of higher Conscience perform it...
a prayer field of dynamic affirmation and confirmation of the Word
with determination now ordained for personal and planetary rEVOLUTION.

Time is of the essence.  There's plenty of time for the overcoming power of Conscience,
but not much time for the victim dictum of faithless fear.  Make your choices count!

For many of you reading this, I'm not telling you anything you don't already know.
There are immutable laws of accountability for individual souls and entire civilizations.
A selective "judgment" awaits each and all according to "works" and "blessings".
The Great Law of Forgiveness is operative to the extent Conscience is for giving.
To that extent will there be mitigation of the "Tribulations" one way or another.
For the soul contracts of some, that will be a speedy exit from this incarnation.
For others, there are other lessons to be learned and tests to be passed.

The compelling need is for a spiritual revival simply because there is no security without purity.
As the veil thins to atONEment, each ONE in God-Love will see God-Love in all that is.

Embrace the virtue as pure intention for Conscience convergence in the likeness of universal LOVE.
Seize the vision of mass2mass TeLeComm to culture Conscience with Effective Sensory Perception.
Claim the victory of "Global Holistic Healing" for reform of the corrupt (sick) health care system.

Hold the immaculate concept (pure intention) for the Emerging Order.

Have the courage to take a stand, raising the standard of love.
Please network this vision for the net work of Net reality
that frames "truth" along more enlightened lines.

May the Love of Freedom be with us,
awakening the pure intention for
focused attention on our
emerging freedom
of, by & for
LOVE.

Keep it Light with
the Gentle Art of Blessing:
http://www.youtube.com/watch?v=obH3wByguhw 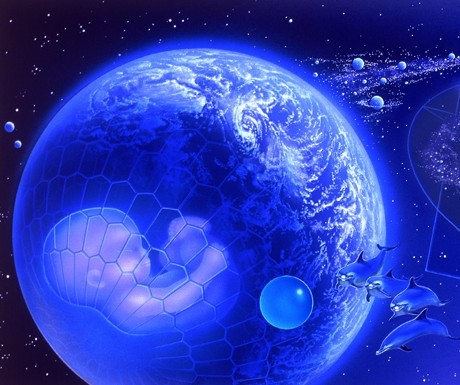 image by Jean-Luc Bozzoli at www.eyewithin.com

"What the caterpillar calls the end of the world, we call butterfly."
~ Richard Bach

The more Conscience in our decentralized global Net reality,
the less corruption, collectively and individually.
And as the Great Reboot approaches,
raise your auric shields with
the Word made
flesh.

A new dispensation of faith in the larger scheme of things
is bringing “cosmic fire” (discerning Conscience) to
your world ONE with the world at large...
as you make it so.

"Kindness is a language that the deaf can hear and the blind can see".
~ Mark Twain

"I love the man that can smile in trouble,
that can gather strength from distress,
and grow brave by reflection."
~ Thomas Paine