Continued from:
“The Most Powerful Love in the World”

Co-Creation with Unity Conscience
is our divine destiny at this time;
Liberating Liberty 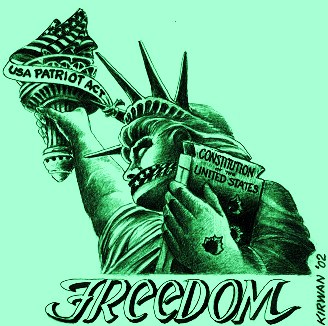 Always remember the first principle of freedom, that
"Conscience is the most sacred of all property."
~ Chief Architect of the Constitution, James Madison

Without vision, social Conscience in our social networks,
the people perish.

With vision, social Conscience in our social networks,
the people thrive.

Global rEVOLUTION... from Eastern nations to Western America
is the true destiny of social Conscience in our new global
instant-everywhere and interactive social networks.
Self-elevation out of world crisis in 2016
is the salvation of our freedom;
unity in diversity with
Conscience.

There is a common theme to both Mid-East and Mid-West trends
whereby masses of people wise up, rise up and stand up for the
first principle of Conscience at the heart of flowering humanity.

This theme is the process of 'Conscious Co-Creation' whereby
human rights 'Co-Create' with our divine universal rights...
'Co-Creating' through the one golden rule/law language
as the gold standard for the currency of Conscience...
The Most Powerful

Witness the liberation of 's name and flame;
the torch of enlightenment as the flame of
lighting the path for United Sovereigns of Earth.

This is the light inspiring global liberation, freedom's heart
which is defining, refining, combining & shining our
God-given gifts and talents in service to the
pure intention which pays attention
to evolutionary ascension
in the Spirit of one
Conscience.

"To understand the nature of God, it is necessary only to know
the nature of love itself.  To truly know love is to know and
understand God; and to know God is to understand love."
~ Dr. David R. Hawkins, "The Eye of the I" (pg. 88)

This Capstone Conscience
is dedicated to the
One Eye

You don’t have to be perfect to consider the moral imperative of, by, and for
perfect

Conscience -  your Co-Creation with “G.O.D.” as
Geometrically Ordered Divinity; the ‘Law of the Angles’
as frames the ‘Language of the Angels’ at the
heart of our better nature and the
natural order of the
Universe.

In order to initiate this Co-Creative Ascension Process,
assemble the components to the capstone vision:
Define, refine, combine and otherwise shine
the

in all four quads of

This is the code to

maps
for the navigation of your
conscious evolution
'On the Path'
home to:

Singular Vision
fulfilling the Great Spirit
of, by & for the Great Law at the
heart of a rEVOLUTION in Conscience
for this prophetic time of global transformation.

Throughout history, many enlightened pathfinders and way-showers
have known of this prophecy and the cosmic clock timetable.
These are those who have come to show us the way.
The pure in heart resonate with this path home.
They now sense the urgency of the hour.
They’re grateful for the opportunity
of many lifetimes culminating
at this time, ordained by
a Higher Power...

The wisdom keepers, Gnostics, Adepts and Avatars of history
have told us that all things would be made known at this time.
They knew this would be the end of world as we’ve known it.
They knew that materialism would succeed at the expense of
the Spirit that matters, causing chaos and warranting change
as will transform Earth as a platform for the evolution of souls.

The beginning of a systemic paradigm shift to full-spectrum Conscience
will indeed be the end of what we see as status quo paradigm paralysis.
And as the veil thins rapidly to welcome the Spirit that matters now,
many are awakening to the great opportunity with all the challenges.

For some it is the ‘crucifixion’ on the cross  of
Spirit as it descends to, and ascends from
what matters, the ‘chalice’ for Spirit as
the body temple for Conscience as
resonates with the universal
law governing a soul’s
cross-referencing
of Spirit that
matters;

The whole point at the center of the cross-bar is the same
point of the 'capstone' of Conscience on the 'pyramid' of
Self and Civilization. Where they meet is Unity Conscience.

Assembling the components to the
"Capstone Conscience":

This opposition to strategic positioning with Conscience
is the crucifixion of Christ-like love which many people
see in the world, feel in their life, and sometimes act out.

When you suffer this 'crucifixion', it's easy to awaken to
utter contempt for the whole experience, getting stuck
in the suffering sinner/saint syndrome with no resolution.

Others get past the crucifixion with a Resurrection Spirit,
a philosophic calm which sees the justice that just is...
and awakens to the opportunity with Spirit that matters:
The Most Powerful

It is this Resurrection Spirit which pricks the Conscience and
centers one in the heart that is for giving, rather than for-
getting and blaming others for what's wrong in your world.

Such centered calm is the Spirit that matters, rest in action,
like a still mountain lake which reflects the heavens and yet
allows depth perception into the still waters of Conscience;
The Most Powerful

Not all people have awakened to that Conscience, but when they do,
there is no going back to "DUH" (Dumb, Unconscious and Heartless).

When in full Conscience, one is 'resurrected' or otherwise 'enlightened'
and old habit momentums of "DUH" lose their grip.  In full Conscience,
there is only pure intention to pay attention for evolutionary ascension,
hearing that still small voice of Christ-like discernment as a 'yea' or 'nay'
with each conscious decision you make; each fork in the path home to
The Most Powerful

as unity in our diversity,
the greater is the natural result with our
Common Sense Unity Conscience.

casts out faithless fear, dark-side desires,
and the paradigm paralysis known as ‘stinking thinking’.
It gets off the cross of suffering with a BE-attitude beyond
pleasure/pain, loss/gain, fame or shame as is all the same
when on the path of Unity Conscience, the Resurrection Spirit
of, by and for conscious evolution; the path of the ascension. 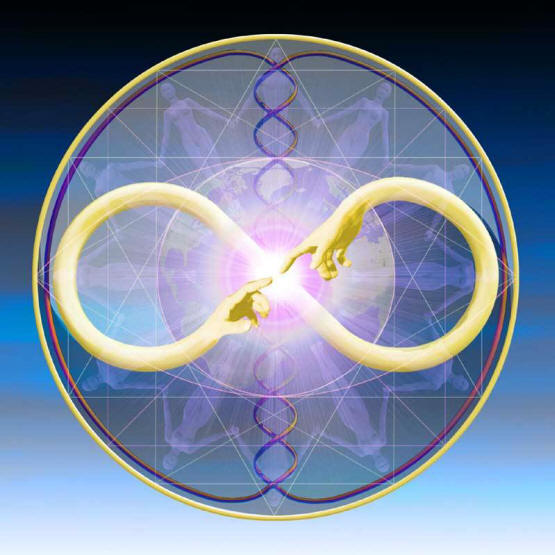 'Polarity' is the two-in-one… Co-Creation with the Resurrection Spirit
as the ascension current, the currency of Conscience which transcends
“duality” (divisive diversions, dysfunction, delusion, denial, dis-ease),
which are all side-effects from the downward dis-integration spiral
of DUH distraction from an up-wising and up-rising ascent path.

With the compass of Conscience, we are naturally guided for self-correcting
self-elevation of an up-ward-mobile salvation nature: our own self-fulfilling
prophecy on the ascension current 'home' to the one Heart of all hearts.

The initiation of this path to 'atONEment' is the end of the
sense of separation and suffering as we have known it.

A new time follows the 'end times',
and that prophetic time is upon us.

The birth of a new Earth is a new opportunity
beyond the world as we have known it.

As the veil thins to Universal Love Conscience via Galactic Alignment at this time,
a 'Prophecy in Motion' - Movement to WholEness - is being harnessed.

Truly, the harnessing of the most powerful

in the world
is now like the discovery of fire – Spirit fire – for the 2nd time,
the prophesied ‘Second Coming’ in our collective Conscience.

Like the divine spark which ignites every soul that comes into the world,
a conflagration of spiritual fire is igniting the soul of freedom worldwide.

Witness how freedom’s flame is rocking the cradle of civilization in the
Middle East… a classic example of the ‘crucifixion’ on a massive scale.
All that is less than freedom-in-

is being powerfully tested.

With full faith in the outcome, we are Co-Creating a path as we go,
conscientious to know better and do better through what we all
feel in our hearts, think in our minds, and do with our hands.

So begins a great testing of soul ignition for the Great Purification.
Either we awaken to eternal salvation with the Spirit that matters,
or by default, the DUH momentum of dark-side contempt keeps
suffering on the cross of the 'crucifixion' for the world's "SIN"
(Stuck In Negativity).

Obviously it takes a mature Son or Daughter of the Most High
to comprehend the mysteries of a God of Love unveiled
for the natural ascent ‘home’ in full Conscience.

Mature Conscience is well aware that the
most difficult thing in the world is
to remain non-attached to
worldly distraction,
diverting us
from

When the whole world is going through the biggest
transformation in the history of recorded civilization,
there's nothing more valuable than the vow of virtue
and valor for the victory of freedom with this vision…

Keep the faith... this too shall pass!

All the betrayals of Truth and Love that we see in the world
have no power other than that which one gives them.
Fearless faith trumps faithless fear on the path of
conscious evolution with pure intention for
focused attention on our ascension…
however, ‘immature souls’ are
not always able or willing
to be fearless in the
face of Source.

We ask ourselves, Who am I to be brilliant, talented, fabulous?
Actually, who are you not to be?
You are a child of God.

Your playing small does not serve the world.
There is nothing enlightened about shrinking so that
other people won't feel insecure around you.

We are all meant to shine as children do.
We were born to make manifest the glory of God that is within us.
It's not just in some of us; it's in everyone. And as we let our own light
shine, we unconsciously give other people permission to do the same.

As we are liberated from our own fear,
our presence automatically liberates others.”

A child can understand the concept that God is Love
which is why you must be like children to enter the
'Kingdom Conscience', the heart of true sovereignty.
This is why we’re meant to shine as children do.

If you can still do that, guided by inner sense innocence,
you will bless and release inordinate fear in full faith that
you are liberated by the Presence of a Higher Power;
The Most Powerful

“For, beloved, God does not open the kingdom of heaven to you unless
He also opens the depths of hell.   Understand, then, beloved,
that those who truly love will not fear the embrace of Christ
or the challenge of Death and Hell."
~ John the Beloved, 6-24-90, via E. C. Prophet

Continued at:
The Great Testing of Souls on the Path of
Conscious Evolution