Once you realize the "Cosmic Scheme" of universal order and harmony mirrored in
the miniature "solar systems" at the atom level within our body, you will realize
a cosmic truth of the divine blueprint whereby "as above, so below".
We are indeed in the universe and there is a universe in us.
The mysteries of "God-in-man" are not a mystery
when the "measurement of man" is
the consciousness of
UNIVERSAL
LOVE. 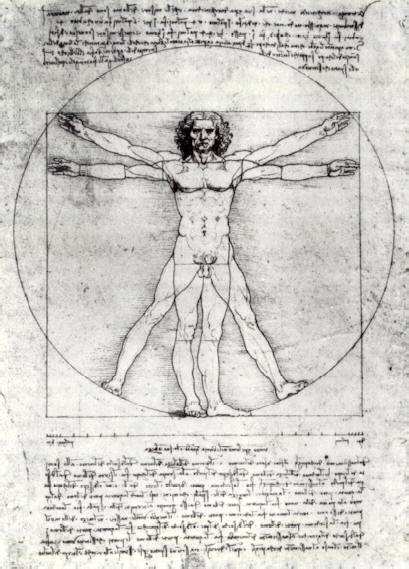 This is what Leonardo de Vinci was saying in his Man Squaring the Circle graphic of man as "the measure for the universe". That message was so heretical in Leonardo's day -- like his designs of flying machines hundreds of years before their invention -- that he coded this "human mirror" of cosmic law by writing the truth of it backwards using a mirror.  Rather than get persecuted for exalting man as a higher power than theocratic indulgences of his day -- the religious "BS" (Belief System) whereby parishioners could get a ticket to heaven for the right price -- Leonardo was discreet.

What the "de Vinci" code is really saying is that the body of man -- in it's configuration and geometrized perfection -- is in fact a bioenergetic blueprint of the ancient wisdom whereby "the kingdom of heaven is within us".  In other words, man has CONSCIOUSNESS which is "the measure of the universe".  And the higher one's awareness of the body as a "map of consciousness" of divine configuration -- a blueprint for cosmic law and order united by the "harmony of the spheres" (divine love) -- the greater one's reflection (mirroring) and perfection (modeling) in the image and likeness of Higher Power in your body, your mind, and cosmos at large.

-- more at "The Prime Directive"